Before we get started, don't forget to enter my giveaway here, for a super cute, custom cupcake charm.

I have to first say that this is not my idea, I saw it ages ago on a blog.  And of coarse that was pre pintrest so I have no idea where I saw it.  I had also forgotten about it, until Tip Garden reminded me by making these awesome waffles.  What I loved is that they are just made from the tube rolls you get in the dairy section.  How can you go wrong?

So I bough the grand size rolls because I have a large circle waffle maker instead of a square one.  I also made sure to get the Cinnabon brand, that has cream cheese icing.  That way I was sure to not have to share with hubby.

So this is going to be like the easiest thing ever.  Are you ready?

To start get your waffle iron heating.  Then get your cinnamon rolls out and your are all set.

Once your iron is hot, spray it well with cooking spray and place one cinnamon roll in the waffle iron and close it. I had to hold mine closed because the bun sort of puffed up. 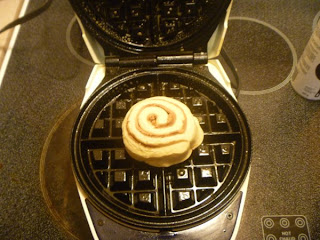 I let them cook for 3 minutes and then transferred them to a plate.  I then put on a scoop of the frosting so it could melt.

I then made the rest and ate one.  I had planned to wrap them up and freeze them so I could eat them over the next few days.  But that didn't happen, I think I ate them all in 3 days, or less.  I can't really recall how long it took me.  Or I just don't want to admit it.  Either way, they were good.

So for a fast fancy breakfast, this is perfect, I love things like this.

Posted by Unknown at 9:46 AM 15 comments: Links to this post

Hi all, don't forget to enter my giveaway for a super cute cupcake charm! here
Have you ever heard that you should not always believe what you read on the Internet?  Well you shouldn't.  Unless it has to do with food, and how good something is.  Like when I read about Panera on a blog.  The blogger said it was amazing and that everyone should try it.  Well at the time we did not have that place here in Canada.  Then one day we did.  So I remembered and tried it.
I have to tell you right now, the Internet was right, this place is awesome!!!  I tried a few things, and since I cannot eat bread, I got a scone.  A cinnamon scone.  It was love at first bite.  And I may have cried a little inside when I realized I had only bought one.
Then I saw a recipe on Pioneer woman.  It was fate I tell you!  She had a recipe for cinnamon scones, and I was sold.  And it only took me like a year to finally try them out.  I am so sorry I waited so long, my pants aren't, but I am.

So I made them thinking I would take them to work and share.  Then I ate one, and promptly hoarded them and decided to tell people at work I had not baked at all.  They are none the wiser I think.  Unless they took note of the tight pants I am wearing now.
So this was really easy, a little scary since I have not made scones before, but you know, it all worked out.

Cinnamon Scones
From Pioneer Woman
Pre heat oven to 350
-3 cups all purpose flour
-1/3 cup sugar
-5 TSPs baking powder
-1/2 TSP cinnamon
-1 cup unsalted butter
-3/4 cups heavy cream
-1 egg
-1 TSP vanilla
-1 cup cinnamon chips ( I used the mini ones)
Topping
-1/2 cup sugar
-1 TSP cinnamon
1 1/2 TSPs heavy cream
In a large bowl sift all dry ingredients together.  Cut up your butter, I used cold because I was not sure what to do.  Then use a pastry cutter to cut the butter into the dry stuff, until it is all crumbly.  Add your cinnamon chips.


Using a fork, mix all your wet ingredients together then mix into the dry with the fork.  Do not over work, just mix until it all comes together.


Turn the mixture out onto a floured surface, or parchment like I did, and mix it together a bit to get all the dry bits to come together.
Shape the dough however you want, a circle, a square, whatever.  And pat it flat.

Mix the topping and spread it over the top of the scones and pat it down.
Cut your scones with a knife or pizza cutter to the shape and size you want.

Use a spatula to transfer the scones to a lined baking sheet and bake for about 14 minutes.
I figured they were done when I pushed on the sides and they were not soft.
People, these are so good, they are sweet like a muffin but have the heaviness of a scone.  I cannot eat bread because of how doughy it gets when you eat it, so this is perfect for me.  I made them really tiny so I can eat a few, and like I said I had planned to share them.  Plans do not always work out people, trust me.  And that is something you can believe on the Internet!

Posted by Unknown at 9:38 AM 12 comments: Links to this post

Posted by Unknown at 9:28 AM 26 comments: Links to this post