So if the words Irish Cream drew you in, then you are not alone.  I have to admit, that Irish Cream is one of those things I could drink for ever.  And I am not even really allowed to drink, so you know I have to get a little bit in some how. Let me share the most amazing story ever!

One day I was in Micheal's, and I had a coupon, nothing was speaking to me.  I was looking and had to use it, it feels wrong to go in there and not use your coupon  So I settled on a donut pan. I was all excited, thinking donuts are going to be awesome and how I could not wait.  Then I forgot about it for about 6 months.  The end.

I know right?  Classic me, I seriously need to think about the things I buy and how to justify them.  Or at least use them, because nothing beats the 10 year old candy thermometer I had, still in the package.

So I looked around for some donut recipes and just didn't really find anything amazing. Well I found lots of great stuff, but I wanted something super easy, because it was Friday night and I just wanted a donut, I gave up and just used the recipe on the back of the pan.  I mean it is by Wilton, so you know it could not be that bad.

The only problem was that the recipe was for a regular donut, and Pork Chop only eats Chocolate.  So I made a judgment call, and added some coco powder.  I think it worked okay.  But I think next time I will use melted chocolate or something.  I didn't get the strong chocolate flavour I wanted, but it wasn't bad.

So here you go.

*I made my own butter milk, just put 3/4 TBSPs of white vinegar in a measuring cup, add milk up to the 3/4 cup line, mix and let sit for 5 minutes

** & *** I did not measure, I just wanted enough to cover my donuts, so I just dumped stuff into a bowl and mixed, it worked.

Then put the mixture into your pan.  Now I thought I was smart and put my stuff in a measuring cup and was going to pour it in.  No way, it was so thick I had to use a disposable piping bag.  Not the end of the world, but it meant I had one more thing to wash. GRRRR.

So I pipped my filling into the pan, after spraying it with cooking spray and put it in the oven.  I think I under filled some and over filled others, but it's all good.  Maybe not everyone likes big donuts, who they are I have no idea, but it could happen.


I baked them for 8 minutes, maybe a minute too long really then let them sit for a minute before I took them out and put them on a cooling rack.  I then filled my pan again and repeated the whole thing.  I got 12 donuts, some bigger than others, but all tasty.

When I was ready to glaze them I took a bowl and put some icing sugar in then slowly added the booze until I got a nice thick glaze. I did have to add a bit more sugar because I got a little too eager with the booze.  You can't really blame me.

So once the glaze was smooth I took a donut and dipped the top into the glaze, sort of twisted it and lifted it up. I rolled the donut around a bit to make the glaze cover the top, then put it on a cooling rack.  I sprinkled on some sprinkles, and then figured out what I forgot to do.

So if you are going to do this please put a cookie sheet or the very least some wax paper to catch the drips and the sprinkles.  Because the sprinkles just fell off.  So my donuts looks really sad, but they tasted good.


And for Pork Chop I asked him if he wanted to decorate some, he said yes, then when I had everything ready for him he changed his mind.  I swear I may kill him one day.  Anyway, I just drizzled melted chocolate on his because he is so young, and I didn't want to share my boozy donuts with him. 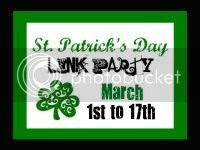 Best parts of this post--Drunken Donut Friends and Poop in a pan--classic! ;)

I love, love, love Baileys...so any recipe involving it draws me in. These look great. It did make me laugh when you described them as 'poop in a pan'...so many things look a bit suspect at that stage, but they turned out great!

Anything with alcohol, especially Bailey's, is perfect. And with donuts?? Awesome!

All of these St. P posts are really getting me in the mood!

Great idea to use Bailey's! Sprinkles or not, these donuts look great!

I love Irish Cream and donuts...this is a "dream come true" kind of donuts for me! The Irish Cream glazed sounds wonderful and I'm sure it tastes amazing! Can't wait to make some in my own kitchen.

I love this recipe, and poop in a pan never bothered me!

Hi there!
I’d love it if you’d stop by and link this up at Themed Baker’s Sunday. The theme this week is St. Patty’s Day treats!
Hope to see you there!
Cupcake Apothecary
http://cupcakeapothecary.blogspot.com/2012/03/themed-bakers-sunday-27.html

yay!!! you've been featured @ NORTHERN COTTAGE! C'mon over & grab a button! So glad to have ya link up! xo