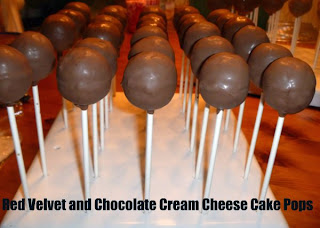 Okay so this is my second recipe using that new chocolate cream cheese spread.  It did not turn out as I had wanted.  I don't know if it was the fact I used an actual from scratch cake and icing, or if it was that it was cream cheese icing or what, but I was not as happy with it as I am usually with my cake pops.

I will still share it because they were eaten within seconds of hitting work and Pork Chops class.  So maybe it was just me, who knows.  Basically I just made extra cake when I made those red velvet cupcakes and extra cream cheese icing.


I did the usual and just crumbled up the cake, it was day old but I usually do day old cake, I bake it then once it cools I wrap it up.  Anyway I crumbled it all up and then added enough of the chocolate cream cheese icing to get it to stick together.  I should have added a bit more, but I am not used to this sort of cake pop, the box mix and pre made frosting is what I know.  Anyway it worked.

Originally these were to be for a friend who had her baby in the NICU, we were going to visit, and I stayed up way late to finish them, but I was so tired that I never even decorated them.  I was so embarrassed, but figured the nurses wouldn't care.  Unfortunately my poor friend and her baby didn't have a good night so we had to put off our visit. Not a big deal, it actually meant I had cake pops for Pork Chops dance a thon, so it all worked out. And on a happy note, that cute little baby and my friend are now all settled at home, so Pork Chop is counting the days until he can hold the baby.

So once the cake was crumbled and mixed up I used my cake pop mold from My Little Cupcake because I like how uniform them are and the large size.  I was doing the forming and the all the stuff in one night so I froze them.  And some would fall apart or crack, so I think I really needed some more icing, but I was tired and just kept going.
I was so wanting to decorate them with something pretty, but the fact that they were even done and wrapped was good enough for me, it had been a long day at work.  Anyway, they still went over well, as I said the kids in Pork Chops class liked them, and they didn't last long at work.  So maybe it was just me, but in cupcake form this combination was better.
I think that my next chocolate cream cheese creation was even better than this one, not as good as the cupcakes but a close second.  All I have to say is my co workers know me well, because one of them handed me some coupons for the chocolate cream cheese, she was all "just in case you want to make more things with it."  And I so do, so that was a great treat to get.
I don't know what I want to make next with this, but there will be more, trust me.

Anything red velvet and I'm in! YUM!

I bit they were all good~looks like you could open a cup cake shop:):)