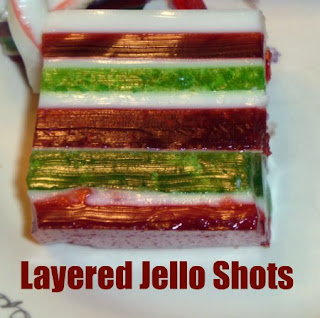 So these are amazing, and even two weeks later I am still sort of slurping them down.  I loved jello as a kid, and Pork Chop loves the idea of it. He is always lets make jello, he used to say jelly, which was way cuter.  Anyway he likes the idea of it, but eating it, not so much.  Anyway, I saw this on Pioneer Woman, she called then jello fingers which was kind of gross, so I changed that.  And I had to adjust the recipe a tiny bit for me but other than that this is it!  I made it virgin, because I could not bring boozy jello to work, or feed it to Pork Chop, but the idea is there.

Basically you can tailor the flavor and colour to be what ever you want.  Like I love cherry limeade, and those two colours just happen to be perfect for Christmas.  But say you want to do a rainbow, you go right ahead.  Or as this could be made boozy, you could do whatever.  Basically do what you want, but just make it; okay?

-5-6 boxes of jello powder in flavour and colour of your choice
-10 envelopes of unflavored gelatin
-2 cans sweetened condensed milk ( the ones in the states are larger, but I used the ones we have here and it worked fine)
-9x13 cake pan
-cooking spray
-boiling water, lots of it ( if you are doing boozy shots, which I cannot believe you would not want to, add booze, lots of it.)

So basically that is what I used, I think that if you were to replace part of the water with vodka or something it would be awesome, so I will mention that as I go along.


Start by boiling lots of water, I just used my plug in kettle and topped it up between layers.  Spray your cake pan with cooking spray to make sure the jello won't stick.  Also check the fridge, I found out my shelf was not level so I had to end up putting a thick layer of paper towel to try and level it off to get even layers, it didn't work perfectly as I didn't do that for all the layers.  Whatever it was still good.


So you need a few hours for this, I was sick so did a layer, sat and watched TV then did another.  I found that in my fridge 20 minutes between layers was perfect. You need them set enough so that when you pour on the next layer it doesn't melt the one beneath it.

After that I ran out of room. So do what you want, but that is how it worked for me.

-melt one packet of unflavored gelatin in 1/4 cup of cold water.  (this is where you would use Vodka instead of water, so 1/4 cup vodka)  Stir. Once fully dissolved pour in one cup of boiling water and right away add in one packet of regular jello, stir really well, but not fast, you don't want bubbles.  Stir until all the jello is gone, and then stir some more, if you get crystals you will get a ruined jello.  So once it is all ready, pour it into your pan and set it in the fridge to set for about 20 minutes.

You can start making the white layer as it will cover about 3 layers in one batch, it will sit out and not set up so you can take your time.  Start with your can of milk in a bowl, then take another bowl and put two envelopes of unflavored gelatin in with 1/2 cup cold water.  (if you are making the boozy version, don't bother to change this out for vodka, trust me you will have enough in the other layers) Once the gelatin is dissolved take a cup of boiling water and pour that over the milk and stir until well mixed.  Then add the gelatin mix, and add another 1/2 cup boiling water and mix all together.  This will be the white layers.

To make sure the layers are set enough, take your pan out and tilt it, the jello should not move at all.  Once you have that, slowly pour enough of the white mixture over to cover it well and chill it again for 20 minutes or until well set.

That is it!  You continue on with that making it as high as you want.  I found that I ended up just making the last layer a double layer of white as I had lots left but not enough room to do another layer of colour in between.

Once that is done, let the whole thing set for at least 2 hours and then you can cut it how ever you would like.  I thought it would be fun to try it with a wavy cutter, I was wrong, it was way better just in squares or simple shapes.  Also this pan of jello is heavy, so if you can just leave the pan in the fridge and pour the layers on, that would be great, trust me I did that the last few layers.


So this is super yummy, and a great option to regular jello shots as you don't need cups, just pick it up with your fingers and eat.  Which is probably the best way to do it when you are drunk, you know, less waste and less chance of breaking cups.  I am smart that way, and this would be perfect for a new years party.  If you make the boozy version please let me know how many shots you got in before you passed out, I don't know if I am brave enough to try this!

I've never made these or tried them but they sure look yummy!

What in the world?!?! My kids would love these!!!! And they look so cool. I like the ones with the wavy cutter =o)

They are so pretty!

Looks so Pretty & yummy! Love your blog! I would love for you to visit my linky party going on now at http://wallisfarmsdailywalk.blogspot.com/2013/01/blog-post.html

These look so good. Thanks for Sharing at Wednesday's Adorned From Above Blog Hop.
Debi and Charly

They are so festive and pretty!

Thanks so much for sharing this at The DIY Dreamer.. From Dream To Reality!! HAPPY NEW YEAR!!