My first real post, but posted second. Are you confused yet?

So as you may know from reading my last post, I wanted this to be my first post, but Hubby was doing something with his IPhone and the computer and I was all like,

and he was all

I have an I phone, ask Hubby it was his idea, I didn't want one, I was fine with my old phone.  But now I am addicted to Plants VS Zombies and I like to check my email and my face book and take pictures.  So I like it, but not enough to let Hubby think he was right.  Because if we go down that road, who knows what could happen.  So Anyway Hubby wrong, me right and all is right with the world again.

I took an extra long weekend from work and had such plans for it, and I got maybe 1/4 of it done, so that sort of sucks, but not really.  I got to spend time with the hubby and kid so it all worked out.

My son is now getting into play dates where he goes or has someone over and the parents don't stay.  I really like it, he loves to have someone over, I have a reason to tidy up and it gives me a reason to bake something to have fun and decorate with the kids.

So this week my son had his little friend over to our house.  So I decided after the cupcake decorating of last time (where they focused on putting as many royal icing eye balls on a single cupcake that they could) that I would do something different.  So I settled on cake balls.  I love cake balls, they are easy and so yummy! And I think anyone who is anyone knows that cake balls are the new cupcake.  No really they are, or at least that is the dream.

A little back story about the ball as it were.  I read about them on a site I go to a lot, Two Peas in A bucket.  (remember I am new to this so have no idea how to link just yet, so just google anything I list, thanks)  They were talking about this blogger named Bakerella, and how she made these cute little cupcake shaped cake pops on a stick. And as I usually do with most things I ignore it for a while and hope that I will not get into it, because once I do, bam!  I am addicted.  So as you can see I gave in and tried them.  Love at first bite, my friends at work loved them, I loved them, my son liked them and the hubby never even gave them a second look.  Sigh, he never eats my baking, he is an apple pie only sort of guy.  Oh well more for me.  Anyway after stalking Bakerellas blog for a while I decided to make some more and they became my new favorite.  Okay end of story.

So back to this past weekend.  I made a 9x13 chocolate cake, cooled it then crumbled it into my kitchen aid mixer and mixed it with half a can of frosting.  Now for reference I use boxed mix usually, it is faster, easier and cheaper for me.  And really the taste is so good!  I then used a cookie scoop to make the balls.  Then I put them in the fridge while I did the dishes then took them out and rolled them smooth.  I put them back into the fridge and got my chocolate ready.  Now I use candy coating, Merkins is the brand name.  I get a huge 50 pound box and it is so good.  I used white melts and used Americolor candy colouring to make it a sort of green. I also find that my white candy melts are lumpy, I use the 30 second microwave method, and then I add paraffin crystals to thin it out.  This makes the coating thin and not as lumpy.

Here are the balls scooped out the left is after I have rolled them, the right just scooped out. 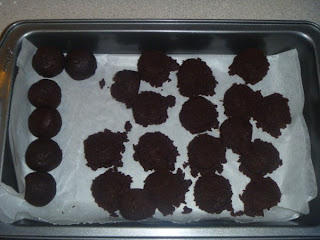 These are white Merkin candy coating chips.  I use a glass bowl and microwave it on regular for 30 seconds at a time, then take out and stir.  I find the bowl holds the heat well so you don't have to re melt them. 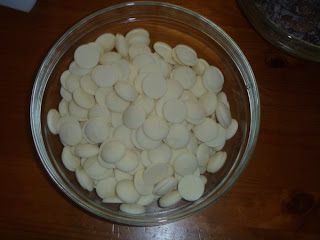 This is my container of paraffin crystals, they are like shavings and you mix them into your melted chocolate to thin it out.  I do it about 1/4 cup at a time, then stir until I get them melted and the chocolate how I like it.  On the right is the bottle of candy colouring.  You need to use an oil based food colouring as water or gel colours will cause the chocolate to seize up. 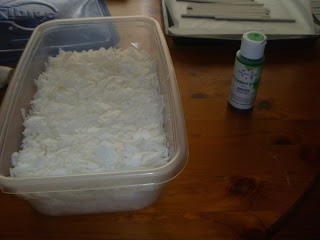 I made these the lazy way by just putting a stick into the top of the pop and dipping then setting them on a sheet of wax paper to dry. If you want to go the non lazy way you can dip them then put the stick in Styrofoam or what ever,  for the boys my lazy way is better:)  If I am dipping these things there is always a fan in my dining room as I like the chocolate to set without putting them in the fridge.  I find when I use the fridge the chocolate cracks more .  Anyway, so I dipped them and let them set. 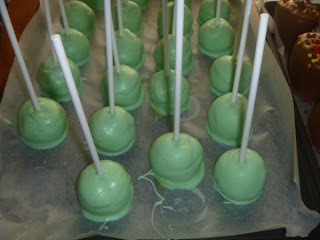 Then I got this idea to dip some marshmallows in chocolate to decorate too.

I have been drooling over these huge marshmallows at the store the whole summer.  Every time I saw them the hubby would say, no you don't need them, you don't even eat them.  He has a point, but what he does not know is that I would have died if I did not get to use them.  So I snuck them into the shopping cart last time, he totally saw and sighed, but you know what, I was happy:)  Anyway I decided that to have a purpose to buying them, because that will make hubby see that I am not just wasting money and sugar, they would be perfect for my kids hockey team.  See that right there, that is how I justify my shopping habits, it's for the team!!!  Anyway so I did what I do with cake balls, put in a lollipop stick and dipped them in milk chocolate then sprinkled them with tiny little leave sprinkles.  ( again I had to have them, and this is totally how I justify that)  They were huge!  I did a few plain for the kids to decorate at the play date, but whatever, they looked cute. So for those I just bagged them up and put a ribbon on them and there you go:)

These are huge, they are like the size of my kids hand! 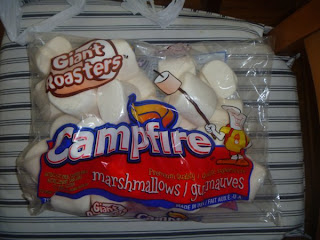 I just dipped them sprinkled while the chocolate was still wet. 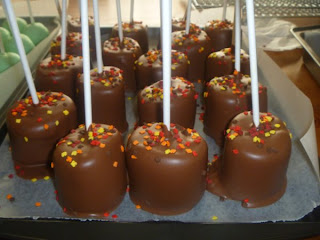 I use lollipop bags and cheap curling ribbon. 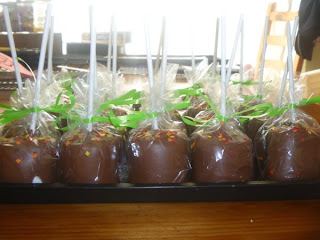 So the play date begins, and I make diner and the boys tell me all this crazy stuff and what not.  Like when you want a baby to eat you have to punch them to get them to open their mouths.  ( keep in mind these kids think anything with hitting and punching is hilarious)  But once I told them hitting is wrong and you are never to hit a baby or anyone ever, they sort of did not think it was so funny any more.  So then it was on to zombie talk and what not.  Yeah I was lost.  I should of had a girl.  Anyway....

So I set each of them up with some cake pops, royal icing eyeballs, edible markers ( which had the poor kid who was over to play really concerned that I was letting him use markers on food) and some melted chocolate and a paint brush.  Now my kid he knew what to do, he set to work,but his cute friend just started painting, I showed him him how to sick on eye balls and colour, but he just wanted to paint.  So here is his creations. 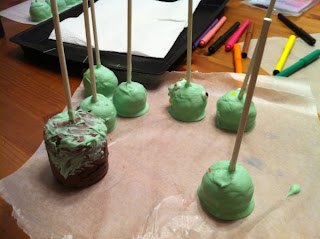 Now since I was working with boys I had to adjust my creative process, and boy do I regret that one.  I was making these super cute little aliens, then bam!  I put butt cheeks on one, and the boys laughed like crazy.  And therefore there aliens all had to have butt cheeks.  I am a bad parent, and I know it:(

Here are mine all cute and lined up.  I love the sad one on the right there, I think he is mad because he has such little arms. 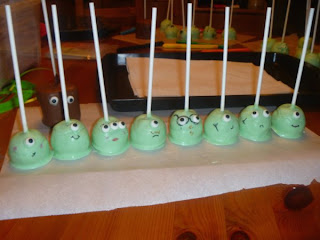 And here is the ill fated butt cheek. 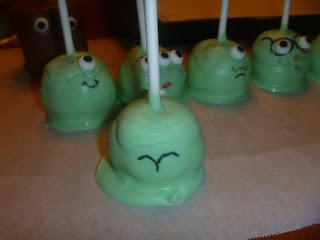 And here are my kids.  Sigh he likes the colours. 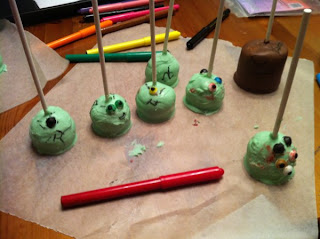 Anyway it turned out great, the boys had a blast, and my son was so happy that he had enough to bring to daycare to share.  I hope I can be one of those people that relaxes when play dates happen.  I am going to set myself up for failure if all kids expect to do something like this every time. But it is so fun.

I also made a bunch of cookies this weekend so I will get to posting that too.  Please feel fee to comment, I have no idea is anyone is reading this at all, but I love to think so.

Oh and an added note since I wrote this and before I posted it my son asked me what I was making for the next play date.  Sigh, I set myself up for this one.
Posted by Unknown at 8:53 AM

Very cute cake pops! Good luck with your new blog. I will enjoy checking in to see what you are baking.