So you know when you get an idea, and in your head it is like the best idea ever?  Well I have those like every few minutes.  But then I usually forget or I realize that I have no clue what I am actually thinking.  So when I thought of this I was all.  " I am the smartest ever!  These are going to be awesome and the people will think I am awesome and then I will be famous!"  Okay I didn't think I would be famous, but I thought the people would like them and think they were cute.

So my thought was Pork Chop was going in for some dental work, being put under and all that fancy stuff.  I wanted to make something tooth like. I had seen the cutest teeth cake pops on line and I so wanted to do that.  But I had no time.  And I was already planning to make marshmallows.  So that is what I had to work with.  So my thought was marshmallow teeth.  Although the irony of giving a bunch of teeth cleaning people sugar on a stick sort of got me, I still did it.  And they looked awful.

But I will show you anyway, because I bet anyone other than me would be able to make them look good.  I will admit mine tasted good, so that counts for something right?  I mean as long as it tastes great, most people can look beyond how it looks.  Right?!


So I started with home made marshmallows.  I made them here in this post for Pork Chops birthday party. I wanted a tooth shape but for the life of me I could not find a tooth cookie cutter.  I bet if I had more time I could of, but I thought of this and basically had two days to figure it out.  So when we were at the bulk food store I found an apple cookie cutter and it was sort of tooth shaped.  And so I went with it.

After my marshmallows were dried over night I cut them out with the apple cookie cutter, then I just used the end of the cutter to trim the top a bit.  It still didn't really look tooth like, but it would work.

Then I used white candy melts, and rushed melting them.  So they were lumpy.  And in doing so, my teeth looked like blobs.  And I was so tired and cranky I just stuck some candy eye balls on them, drew a few mouths on them and called it a day.

I wrapped them up and then put them all together in a metal bucket I got from the dollar store.  It all turned out okay, the girls at the office were really nice and said thanks.  But I bet they were all like, "wow those teeth need some serious help"  But that's okay they didn't say it until after we left, so it's all good.

So if you want to make these, you go ahead, just make yours look better  okay? 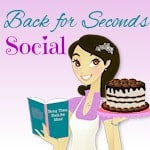 I think they're adorable but I get you on not having something come out like it looks in your head. :)

I agree with Lisa they are adorable and look at it this way you could have done nothing but instead you made them a fun treat:):):)

Ugh I hate it when I have an idea in my head and it doesn't come out! Or you see it on Pinterest or somewhere and it looks awful. Drives me crazy!

Okay, I think these are adorable and I would make you famous for them! And I'm totally impressed that you made homemade marshmallows! Awesome!!!

Those are really cute!