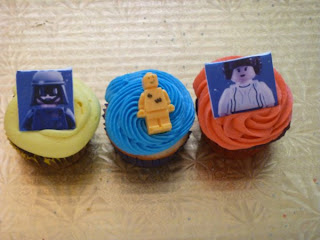 So this is going to be a long post.  I want to share with you how I decorated my cupcakes and the little cake for my son.

I used to make large cakes and it was okay but I hated cutting it up and asking each person "chocolate or vanilla" and then the mess and left overs.  So for my friend Staci last year I made her son a tiny little cake to cut and cupcakes for everyone else.  I think it worked great.  And it was so much faster for me.

So for my son I did the same.  Also I had a cute Lego man mold we got at the Lego store that I needed to use.  It makes tiny little Lego men and he wanted to make ice cubes.  I did not have 100 years to make enough ice with it so we made cupcake toppers with them.  But don't worry I found a Lego block mold and started making ice a few days before the party ( not enough, but what can you do)


I used white candy melts and tinted it with americolor soft food gel.  You cannot use the gel by itself as it is water based and it will cause the chocolate to seize, so I got this stuff that they make called color flow.  You mix your gel colour with this first then add it to your candy melts.  Works great and you do not need to have all those candy colours, just the gels.  Saves you in the long run.  So I used electric yellow as that is all I had and I used a plastic bottle.  I filled the mold and popped it into the freezer for about 10 minutes then popped out the little candies and repeated that until all the chocolate was done.

I showed my son and he was all "you need to draw on them and make them look real"  So, um, yeah.  I took edible markers and tried to draw on them just before I put them on the cupcakes, in a later picture.  Obviously, when you see them, you will know I am not an artist, but whatever, he will not be too scared by this right?

I also wanted to make printed toppers for the other cupcakes and my mini cake.  I got an edible printer a while back, if you check out Kopy Kake you will see a listing of all the printers that they make food grade ink for.  I wanted one for a long time, but thought it would be too costly for just me to do stuff on.  But I kept checking out the weekly flyer's and found one on sale at Walmart for $35.  You need to have a printer just for this as you cannot go back and forth with regular ink, it would not be safe to eat if you did.  So I got the printer and my mom as an early Christmas gift ordered me a set of ink and I got the paper at the bakers warehouse.

I got hubby to look up some good picture on google of Lego people and he found a great picture and printed it out for me.  He does it because I find my printer makes the pictures way too dark and he knows how to do it and make them bigger without them getting all wonky.
So once I printed them out, I let it dry then cut them into strips to make it easier to work with.  I wanted to make them stand alone, so I used fondant and gum paste.  I read on sweetopia that she uses half fondant half gum paste to make her decorations.  She does this as the fondant tastes better and the gum paste dries harder.  So I thought it was a great idea.  I use pre made fondant that I get at the bakers warehouse and I use the Wilton powder since you only need to mix what you need.  I then rolled it out on wax paper.   I usually use my counter and a fondant mat but my kitchen and dining room table are all covered with party stuff right now. 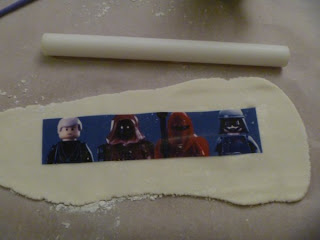 I then used a food paint brush to brush water onto the rolled out dough then placed my print out strip on it and smoothed it with my fingers.  Make sure you have dry hands or it will cause the ink to bleed.
I then used my cute Wilton fondant cutter to cut them out.  You can use a pizza wheel, and I used to, but it was so big and this one is so small and easy to use.  Anyway I cut them all out and put them on a wax paper lined baking sheet to dry out so they were hard and easy to put on the cupcakes. 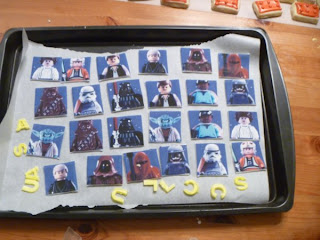 I should mention that I also had the idea to make letters of my sons name to put on the cake, they were okay.  I painted them with luster dust that I had mixed with a few drops of vodka.  I saw that on one of the decorating shows and had been dying to use it.  The vodka dries up very fast and you are left with shinny stuff.

I made my usual butter cream.  I made it on a post before, here.  It is so easy and tastes great.  If you wanted to make it chocolate just mix in some cocoa powder with the icing sugar.  Anyway I left the icing white to frost and fill his mini cake.  Then I divided the rest into three and tinted it to go with the colours I had picked out.  I used three disposable piping bags with three different jumbo tips.  The only reason was so I did not have to stop and clean the same tip over and over.  This also allowed me to get three different textures on the cupcakes.  It sort of makes me look fancy, no one knows it's because I am lazy.


Then to top the cupcakes just push a Lego man or topper onto the frosting while it is still wet, do not let it crust over.  Then they are all done and ready to be put out.
For his cake I just used another print out on icing paper and cut it to fit the cake, put it on and then made boarders and stuck the extra Lego Men I had around the outside.  I stuck his name on the boarder and there you go.  It may not be cake boss, but my guess is he will not even eat it.
True fact, my kid hardly eats my baking.  He will help me decorate cupcakes like crazy.  Even asking for an "in case" cupcake.  ( you know, in case he wants another.  He made that up I kid you not) And then, either it sits and dries out for a week before I toss it, or he makes me take the icing off.  Sigh, I love him but really?


So just a little post party update.  My kid did not eat his cake, he did ask me to unwrap him a cupcake and he ate the Lego man on top.  So all this and he ate none of it. Sigh.

So now on to some new things.  I got a Whoopie Pie cook book I am dying to try out.
Posted by Unknown at 9:34 PM

These are so cool! You really went all out! :)

oh my goodness.. these are all soooooooooo cool! And I'm sure that he only ate one cupcake does NOT mean he didn't LOVE what you did, does it?!
Well I would have LOVED LOVED LOVED to get something like this for my birthday.. the idea with the Legos is just the greatest! TFS!!!
Sylvia xx

Aw thanks:) It would not have been sobad if he actually ate one, he didn't even do that. But he did eat the heads off most of the left over lego men. So there is always that.