﻿
﻿
I have been reading about  these for a while now, I had thought they were called whoopie pies, but I guess I was wrong.  It would not be the first time, but don't tell hubby.

So we were out at chapters and I was looking at the cook books, it is considered research now that I have a blog.  And another way to justify buying a book.  See how I killed two birds with one stone there?  Yeah well, I did, trust me.
﻿
﻿  Anyway I saw this book Whoopies  too bad there is no picture, the book looks so cute.  And if you don't know what a whoopie is, it is a sort of cake like thing, like two cupcake tops, with the icing sandwiched between them.  So I know my husband likes the store version of these. ( I think wipikipdia has a page for everything, weird.)  Anyway he also like chocolate mint things, so that is what I chose.
The recipe from Whoopies by Susanna Tee

So to make these you can either use a whoopie pie pan, which is just like a muffin top pan.  But since I don't need another pan I am just going to use cookie sheets with parchment paper.  This is also recommended in the book. 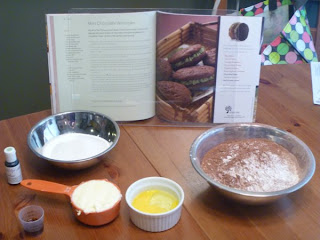 I mixed together the batter first, by mixing the butter, sugar and vanilla until fluffy and then adding the egg.
Mix all the dry ingredients together, I do this by sifting them all together, then mix into the butter mixture.  Once mixed add the milk and chocolate chips and finish mixing. 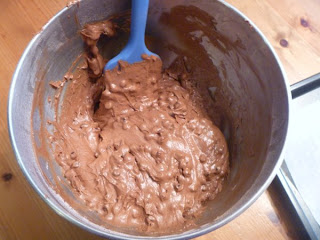 Once mixed I used a larger cookie scoop to make mounds of batter on my cookie sheets.  The book says you should get about 24 out of each batch.  That means only 12 pies, but when I did it, there were enough to make 18 1/2 pies.  ( I got the half one!)

﻿ ﻿
I put two trays in the oven at a time.  I am finding that 3 trays makes the cooking time a bit longer, so I go with two and it works well.  I have a convection oven, so it may need to be one tray at a time if you have a regular oven. They took 7-8 minutes to bake, maybe they are a lot smaller as the book quoted 10-12 minutes.


﻿ ﻿  Anyway, while they were baking I cleaned up and got the stuff for the filling ready.

Mix the butter and mint until well mixed then slowly add the sugar and then the milk, you may need to add more or less milk depending on how thick you want it to be.  Then add a little bit of food colouring, add a tiny bit at a time so he colour is not too dark.


Once the pies were cool and I had my filling in a disposable bag with a large star tip I was ready to assemble.  They say to try and watch up the sides together to get them to be close in size.  If you have a whoopie pan, they should all be the same size.  Now there is justification to get a few pans, just saying, it would make a good Christmas gift.  Hint, hint.

Now I am thinking if I made itty bitty ones, I could dip them in chocolate and make them like the store ones, but way better, because I made them.

Give them a try they were not too hard at all, and I really liked how dense they were, not so airy as the cake mix ones the store makes.

Also the hubby sort of made a face at me when I told him I made them for him, you know mint and all.  So he had not tried one, don't think he will.  So I will eat it, it was yummy and the rest are going to work tomorrow.

Up next  I have some plain cake balls to make so I plan to share with you all a bunch of ways to shape them to get different things. Exciting I know.
Posted by Unknown at 5:58 PM

A year ago I had no idea what whoopie pies were...but then we tried a little one at a Starbucks (we actually laughed when they asked us if we'd like a whoopie pie with our coffee...we said what is that!). Then we went to Maine this summer and these things were everywhere! AND yes, they did call them Whoopie PIES. Thanks for the recipe...I so need to try making these! :)

this is a dangerous post! these look delicious! and I've always heard them called whoopie pies too

These sound so yummy!